These files are arranged in two series and span the career of Robert S. Siffert, MD. One series is the office files of Dr. Siffert from when he served as Chairman of the Department of Orthopaedics at Mount Sinai from 1960-1986 and then as Acting Chairman in 1993. These files include some departmental information in the Administrative folders, outlining in particular the relationship between Mount Sinai and the Orthopaedic services at Elmhurst, the VA, and the Hospital for Joint Diseases. Many of the files relate to Siffert’s outside activities. Of particular note are files outlining his involvement in the American Academy of Orthopaedic Surgeons and his work on handicapped children. There are also files about his work with CARE/MEDICO and his many foreign trips to attend meetings and present papers.

The other series contains material from the Orthopaedics Department History and Archives Project that Dr. Siffert began in his retirement, starting in 1994. This material is composed mostly of reprints and photocopies of articles written by early departmental staff. (Reprints for physicians after Dr. Siffert were not retained as they are usually available electronically.) There are lists created by Dr. Siffert of staff and residents over the years from 1910 to 1995, and photocopies of the Orthopaedics section of Mount Sinai’s Annual Report from 1967-1993. There is also a bibliography of the Orthopedics Research Laboratory. These materials were gathered and made available in the department’s Edgar Bick Library. A display was created showing photographs, books, articles, as well as a compression screwbolt and a transfixion prosthesis developed by Robert K. Lippmann, MD. The display was dismantled in 2012, allowing these items to be sent to the Mount Sinai Archives. 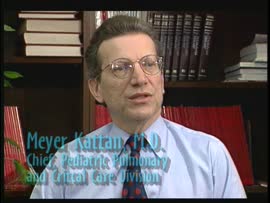 Film about the Department of Pediatrics 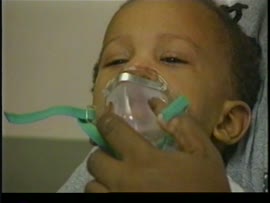 The collection is organized into three series: Medical Subject Files, General Subject Files, and Research Notebooks. Medical Subject Files contains Dr. Hodes' files on medical topics, the majority of them related to his specialties of pediatric bacteriology and virology. Files typically contain a mixture of correspondence, manuscripts and research material related to a particular disease, syndrome or chemical compound. Of particular note are the files related to Dr. Hodes' study of infant diarrhea and the extensive collection of papers related to polio, which include the records of his service on the Congressional panel that testified to the efficacy of the Salk Vaccine. Many subject files contain manuscript material received from other researchers. Major manuscripts by Mount Sinai staff have been identified. General Subject Files includes professional association records, personal correspondence, and material relating to Dr. Hodes' employment at Mount Sinai. They document Dr. Hodes' term as President of the American Pediatric Society, his service on the executive committee of the Mount Sinai Physicians' Practice Association, and many other activities. The series contains correspondence with numerous major figures in the history of Mount Sinai as well as with distinguished colleagues at other institutions. It includes correspondence with his brother Robert and son David, both of whom worked at Mount Sinai. The Research Notebooks series contains eight research notebooks dating from the early 1950s which document experiments carried out on laboratory animals.

The files of the Auxiliary Board form three series: Alphabetical Files, Minutes, and Project Files. The Alphabetical Files include the annual reports of the Auxiliary, as well as guidelines for the Program Review Committee, brochures about the group, by-laws, and miscellaneous memos. The Minutes of the Board date from 1918-May 2002. Included here are also Legislative Committee minutes from 10/1978-1986. The Project Files have folders for each project funded from 1969-2008. The files contain: Project Review and Funding Committee minutes relating to that project, project proposals, correspondence with the grantee, budget/account information on each project, and reports of the project. Sometimes flyers, newsletters or other products about the project are included in the files. The changing scope of the projects reflects the changes at Mount Sinai as well as in healthcare in general. 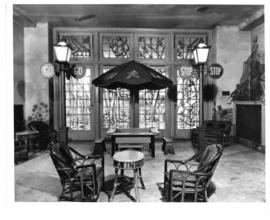 Pediatrics--Articles re: Organization of a Pediatrics Dept.; Rules; Use of Plasma 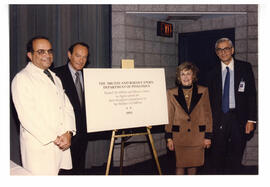 Richard J. Bonforte, Robert G. Newman, Bernice Stern, and Mortan Hyman at the dedication of the Milton and Bernice Stern Department of Pediatrics 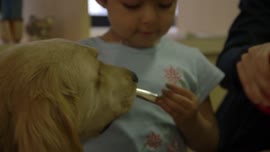 Part of Books and reference material