Advertisements and promotional materials for The Mount Sinai Medical Center

This series includes: full page advertisements, many from the New York Times; original ads from New York Times Magazine; an ad for Bion II, "From Mt. Sinai to Mt. Everest", colored and mounted on foamcore; and a full page ad in Tiempo New York about the Internal Medicine Associates showing a photograph of nurses in honor of Puerto Rican Heritage Month, 11/2006.

This collection contains the private practice records of Dr. Arpad G. C. Gerster. They span almost his entire career as a surgeon in New York City, from 1881-1923. These records are contained in three bound volumes and five boxes. The patient cards were received in three wooden boxes.
The volumes, which were personalized for Dr. Gerster, contain chronological patient records from January 1, 1881 to July 24, 1906. Each patient record has pre-printed slots for the following information: date, age, name and dwelling, business and nativity, diagnosis, treatment, and remarks. Dr. Gerster completed these categories. However, he often had little or nothing to say under 'remarks' and sometimes did not include 'age.' 'Business' was included less often in later years. Presumably, comments under 'treatment' were not completed when not necessary.
The first volume is entirely in German (except for Latin diagnoses). Some of the early entries in the second volume are in English, and by 1892 they are primarily in English. In the front of each volume is an alphabetical index to patients' case records. The last entry in the third volume is on July 24, 1906.
There is a three year gap between the bound volumes of patient records and the first case in the file boxes, which commences on July 26, 1909. Here, cases numbered from 1 - 442 were recorded on pre-printed cards. Some additional questions are included on these cards. These include: civil state, family history, personal history, previous diseases, date of operation, operator, assistant, anesthetist, anaesthetic, amount and examination of urine (chart to be filled in). On the reverse side are pre-printed anatomical drawings for further notations. These forms were clearly meant for use with patients expecting a surgical procedure. However, these cards were often not completed as many patients did not require surgery. Beginning with case number 444 (January 1911) Dr. Gerster ran out of the pre-printed forms and used plain paper to record his patient information. These records reflect the same information as that on the preprinted cards, however they are more difficult to read.
The patient records reflect a private practice of the time. Although Dr. Gerster functioned as a general physician, his practice revealed a bias towards surgically treatable patients. At this time, it would have been difficult to have an exclusively surgical practice because there would not have been enough business to support it. However, because of Dr. Gerster's abilities and prominence, he came as close as possible to having such a practice. Over the span of the records, the types of cases did not show any significant shift in character. The cases have a great deal of variety. Included among the many diagnoses were rheumatoid arthritis, alcoholic hepatitis, acute nephritis, chronic gastritis, double cleft palate, eczema, inguinal hernia, syphilis, vulva cutis, pulmonary tuberculosis, arteriosclerosis, uterine hemorrhage, and many others.
There are a variety of inserts and attachments found throughout the patient records. These include sketches by Dr. Gerster illustrating ailments and abnormalities of patients; correspondence from physicians introducing patients (a number of these are from out of state and many are not in English); pathology lab reports from both the German Hospital and Mount Sinai regarding excised tissue; correspondence from patients; and two radiographic images. (These images are located in: Case Book Number 3, April 17, 1901, and Card File Box 1, in front of Case 104.)
Private patient records such as these are probably uncommon in hospital archives since they do not directly relate to hospital practice. These records are especially interesting because they occur during a period when surgery became safer and more common and when the rise and dominance of surgery as a method of treatment was seen. Additionally, they are of interest because they are the records of Dr. Gerster, an influential and prominent surgeon during his time.
Dr. Gerster's notes end with case number 3670 on February 23, 1923. The patient records continue to October 27, 1923. An unidentified physician apparently took over Gerster's practice shortly before his (Gerster's) death on March 11, 1923.

These papers represent a small portion of the work Dr. Ludwig was involved in during his career, focusing primarily on research he undertook in the 1950s. There is nothing here about his private practice. The files include grant applications and reports of research on connective tissue, which was under the direction of Paul Klemperer, MD, Director of Mount Sinai's Department of Pathology. There is also a folder of material that includes a letter from Norman Boas, MD about a research project they had begun that seems not to have been published. Of note are two slim notebooks where Dr. Ludwig recorded research data, as well as reviews of articles he had read on the topic. He inserted hand drawn charts and tables. They are an interesting example of how a clinician did research at this time.
Six photographs are included in this collection. The originals were scanned to create digital copies and were returned to Mrs. Ludwig. The photographs include four in a series from 1966 that show Dr. Ludwig meeting with house staff in the Department of Medicine, and then going on rounds in the Klingenstein Clinical Center. There are also shots of the First Medical Service staff in 1947 and the Second Medical Service house staff in 1943. Printouts of the scans are also filed in the Photograph Collection.

These autopsies were not the first done at Mount Sinai, but they seem to be the first time the physicians created and gathered together a structured record of the autopsies. The early autopsy reports were signed, usually by a member of the house staff, so names such as Drs. Burrill B. Crohn, Eli Moschcowitz, Israel Strauss (later chief neurologist) and others appear. In 1893 a formal Pathology Laboratory was created by Henry Heineman, MD. In 1895 he turned the operation of this over to Frederick Mandlebaum, MD, who served until 1926. Dr. Mandlebaum developed an allergy to formalin and delegated the autopsy work to assistants. In 1896 Charles Elsberg, MD, later a noted neurosurgeon, was appointed Assistant Pathologist and he created entries in these volumes. In 1904, Leo Buerger, MD was appointed the first Pathological Interne and so he created some of the entries. Dr. Emanuel Libman signed more autopsies than any other person in the early volumes. He served as the Assistant and then Associate Pathologist for many years. George Baehr, MD was in charge of the morbid anatomy and autopsy service from 1919-1926.

These volumes document primarily autopsies on adult patients, with the exception of three boxes of pediatric autopsy protocol records. The first five volumes of this series record all autopsies and wound explorations that were done at The Mount Sinai Hospital from February 1883-December 31, 1910, over 2,025 cases in all. The early volumes are indexed by name and also diagnosis. By volume 3, there is only a list of patient names in the front and no index of diagnoses. By the end of August 1908, there is no longer even a list of patient names. The early volumes have a few drawings in them and there is one photograph pasted in volume 1. There are sometimes un-numbered cases written in the last pages of the log books. They have the letters IND (?) penciled in at the top. These may be autopsies done by individual physicians not part of the autopsy service. Abraham Jacobi is listed as a physician on one of these cases. The entries are initially all hand written, but typed pages are pasted in as time goes on. Note that someone wrote Volume 4 in the front pages of volume 3. The 1912 volume says “no. VIII” on the spine. It is not clear how many volumes are missing between 1910 and 1912.

The volumes were initially used until the pages were filled, and so they end at random dates. Volume 5 ends with December 31, 1910. This may mark the beginning of the practice of volumes being devoted to set time periods, with new years beginning in new volumes.

All of these volumes list the diagnosis, patient information that varied over time (name, age, nationality, date/time of death), and autopsy findings. Initially there are no microscopic findings recorded, but these appear before the 20th century. 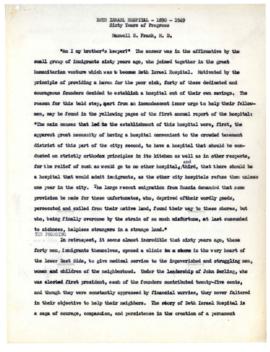 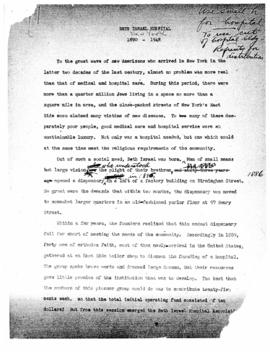 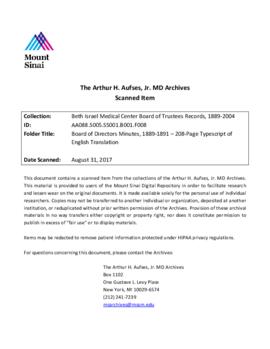 Board of Directors minutes

The inaugural issue of the newsletter in Spring 2017 was titled Mount Sinai Fit. In Summer 2017 the title was changed to Calm & Fit. 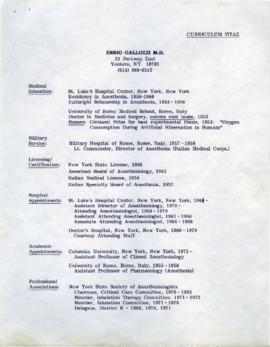 Collection of materials by or about William Augustus Muhlenberg

This small collection includes a letter, a hymn, and several books written by William A. Muhlenberg, a few inscribed to particular people. Several books written about him are included, the most significant by Dr. Robert Abbe, which describes Muhlenberg's childhood, and bears Abbe’s autograph, and Muhlenberg’s personal Bible. The finding aid container list also includes other books about the family and its history that are held in the archives library.