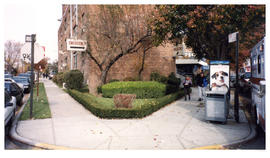 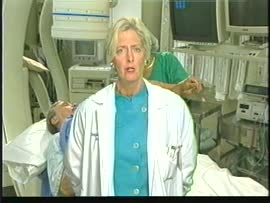 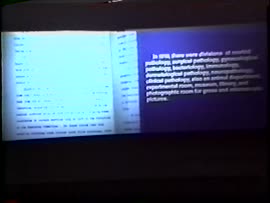 In an interview with cardiologist Edward Dwyer, MD, he describes his attraction to medicine as a youngster after listening to a weekly science program on the radio; his decision to attend Columbia University on a baseball scholarship, and staying at Colombia for medical school (College of Physicians and Surgeons class of ’57); changes in science and medical practice between the 1950s and 1960s, and the merger between Roosevelt and St. Luke’s Hospitals in 1979, as well as other details of his medical career and life. 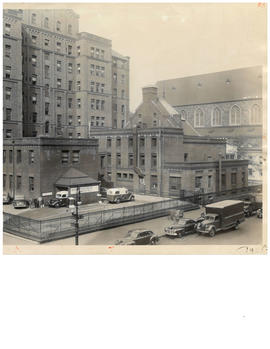 Image shows street view of Ninth Avenue between West 58 and West 59 Streets; includes the Accident/Emergency Building with ambulances and the back of the William J. Syms Operating Theatre of Roosevelt Hospital. 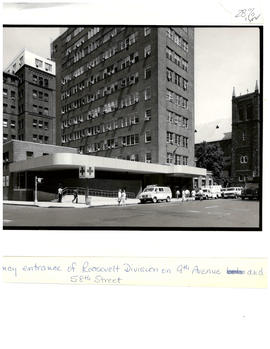 This image of the Ninth Avenue end of the Roosevelt Hospital complex showing the new Emergency Department entrance, which opened in 1981. The Joseph T. Tower Memorial Clinic is also seen to the right. 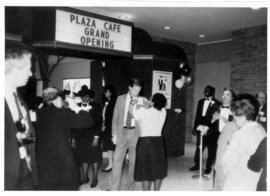 Opening of the Plaza Cafe at The Mount Sinai Medical Center

An image from the opening of the Plaza Cafe at The Mount Sinai Medical Center. Administrator David Freed is in the center. This facility is located in the Guggenheim Pavilion.

This collection of papers from Dr. Rowe’s office is different from previous Presidents’ collections, providing a higher level view of Mount Sinai. There are very few files relating to the various departments of the Medical School or the Hospital as is seen in earlier President’s files. There is also little here relating to the Hospital’s establishment of the Mount Sinai Health System, although the merger with New York University is covered. This is undoubtedly due to the fact that Dr. Rowe served as President of the Mount Sinai Medical Center only. Earlier Presidents had also been Dean of the School of Medicine and so had oversight over these departmental or institution specific issues.

There is a great wealth of material regarding Mount Sinai’s efforts vis-à-vis other institutions. This includes proposed initiatives with Columbia University, the affiliation with the City’s Queens Hospital Center and the years of controversy over privatization of the Queens’ municipal hospitals, and the School of Medicine’s affiliation contracts with Elmhurst and Queens Hospitals. There are also files relating to the Department of Geriatrics and the development of creating ties with businesses and Keio University in Japan.

The merger with New York University is documented by two distinct series of files that were received and processed separately. The “MS-NYU Initiative” files (boxes 24-25) cover the initial proposal, development and implementation of the merger. The “NYU” files (boxes 27-28) document Dr. Rowe’s service as President of the combined Mount Sinai-NYU Health following the merger and include departmental correspondence, real estate / building records, and an extensive collection of material related to the NYU Downtown Hospital.

Mount Sinai’s real estate holdings and physical facilities are documented by an extensive subject file on buildings (BLD, boxes 4-6), and its financial activities by a finance series (FIN, boxes 13-14) and an extensive series on fundraising (FND, boxes 15-20.) There is a small amount of material related to Mount Sinai School of Medicine (box 26), primarily covering commencements, convocations and honorary degrees.

Also of importance are the extensive files on the search for a new Dean in 1996/97, the many files charting Mount Sinai’s efforts to deal with the rise of AIDS in New York, and the files on establishing the Office of Technology Transfer and its later efforts, a matter of great importance to institutions in the late 20th, early 21st century. 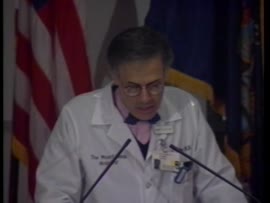 Recording of the inauguration of the Cardiovascular Institute

Each report presents a variety of patient success stories, research breakthroughs, and other advances in the field involving Mount Sinai physician-scientists. Through these reports we hope to show the quality and breadth of care available at the Mount Sinai Health System, and to encourage referrals for consultations or advanced procedures. 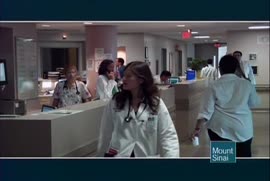