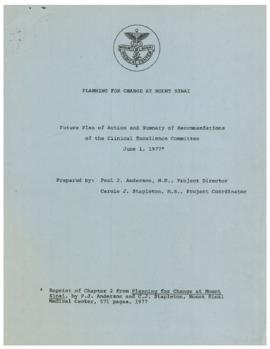 The Clinical Excellence Committee (CEC) was formally established in the Spring of 1974 by the Board of Trustees of The Mount Si¬nai Medical Center. The Committee was formed in response to a request from Dean [Thomas] Chalmers who, after reviewing the history and current problems of the clinical services at Mount Sinai, concluded that planning for change "must be based on data gath¬ered in an objective manner and presented for discussion and decision to the Board of Trustees." He proposed that a special committee of trustees be appointed and charged to study, review and recommend to the Board of Trustees optimum arrangements for organizing and evaluating the clinical services. He suggested that the committee function through three Task Forces composed of faculty and trustees: One to define goals and objectives of the academic center; another to analyze alternative patterns for financing academic appointments; the third to define methods for evaluation of competence of clinical staff in the areas of teaching, research and service responsibilities.

The Mount Sinai School of Medicine had evolved less than ten years ago out of The Mount Sinai Hospital of New York. These two institutions with their affiliated hospitals had developed into the Mount Sinai Academic Health Center. Evolutionary progress carried with it the responsibility to examine and act upon a variety of academic, financial and health-care delivery problems. Each set of problems emphasized the need to improve institutional performance by defining what we wish to achieve, how to achieve it and how to measure the quality of the achieve¬ment. The proposal for the CEC and its Task Forces was essen¬tially a mandate for strategic planning towards the long range objectives of the academic health center.

Objectives of this type had never been explicitly stated but examination of our past history, present operations and developing trends in clinical care, medical education and research made it apparent that our academic health cen¬ter was functioning as if its objectives are:

The purpose of the Task Forces was to define goals and stra¬tegies that would assist in the attainment of these ob¬jectives. The Task Forces represented a vertical cross-section of the institution on the premise that planning for the future should involve those who will share responsibil¬ity for the effects of long-range planning. Thus, trustees, administrative officers, department chairpersons, senior and junior faculty of full-time and voluntary status, house officers, and students were involved in the process.

Task Force A was charged to develop goals and objectives for the Mount Sinai Medical Center in recognition of its role as an academic health center by means of (1) analysis of the health care delivery system in the medical school and the hospital; (2) an investigation and analysis of the past and present issues and policies of Mount Sinai; (3) the development of alternative solutions and recommendations for the long-range future.

Task Force B was charged to develop an organizational model for the medical center and to consider the special problems of its faculty.

Task Force C was to propose methods of evaluation of future programs in medical practice, education and research.

The Project Director [Paul J. Anderson, MD] and Project Coordinator [Carole Stapleton] served as staff for the Task Forces and their subcommittees, arrang¬ed and attended all meetings, prepared and distributed min¬utes of meetings, reviewed and distributed appropriate lit¬erature, and obtained and analyzed data on various subjects for use by the Task Forces and their subcommittees.

The recommendations were next presented to the Clinical Excellence Committee and, after acceptance at this level, were approved by the Board of Trustees of the Medical Cen¬ter, Inc. on October 18, 1976.

The files are arranged by Task Force and then alphabetically by subcommittee name.

Processed by Barbara Niss in November 1986.