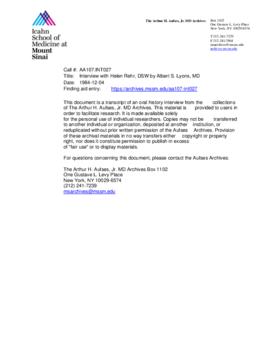 Dr. Rehr was born in 1919 and grew up in the Bronx. Both of her parents were originally from Poland, and she had an older brother who passed away when she was eleven. She attended Hunter College, earning a bachelor’s in mathematics with an economics minor in 1940, then went on to Columbia University School of Social Work (CUSSW), where she earned her master’s degree in 1945 and doctorate in 1970.

Before coming to Mount Sinai Hospital in 1954 she worked at: Sydenham Hospital, Grasslands Hospital, Bellevue Hospital, and the New York City Health Department. While at Mount Sinai she developed the Department of Social Work alongside Doris Siegel, including earning seats on the Medical Board for social work and nursing. Dr. Rehr was the Kenneth L.M. Pray Professor at the University of Pennsylvania School of Social Work during her sabbatical in 1978 and taught social work in healthcare and applied social work research methodology to its students. She also had visiting professorships at Ben Gurion University, Hebrew University, and Haifa University.

A native of New York City, Albert S. Lyons was born in 1912 and graduated from the Columbia University College of Physicians and Surgeons in 1936. After completing a two-year surgical internship at Beth Israel Hospital, he trained as a surgical resident at Mount Sinai under the tutelage of Dr. John Garlock. He went on to a long career as a surgeon at Mount Sinai, serving as Chief of the Intestinal Rehabilitation Clinic at The Mount Sinai Hospital and as Clinical Professor of Surgery at Mount Sinai School of Medicine. He also maintained a private practice and served as an attending surgeon at several other hospitals, including the Cabrini Medical Center from 1955 to 1978 and the Elmhurst City Hospital from 1966 to 1984.

As Chief of the Intestinal Rehabilitation Clinic, Dr. Lyons played a major role in the establishment of patient self-help groups to help surgical patients cope with the challenges of life after surgery. In 1951 he helped a group of ileostomy patients at Mount Sinai organize a club to boost morale and help one another; nicknamed the “QT Club” after the letters of the surgical wards where patients recovered after their ostomies, the group proved a success, and in 1952 Dr. Lyons published an article on the club in the Journal of the American Medical Association that inspired the formation of similar groups throughout the United States. In 1963, representatives of ostomate self-help groups from across the U.S. and Canada met for the founding convention of the United Ostomy Association (UOA). Dr. Lyons served for many years as the UOA’s Medical Advisor, and when an International Ostomy Association (IOA) was formed in 1978, he served as a member of its medical board. In 1983 he was the first recipient of the Archie Vinitsky Award, the IOA’s highest honor. Throughout his life he gave generously of his time to help ostomy groups across North America and the world.

In addition to his surgical and professional accomplishments, Dr. Lyons was a passionate scholar of the history of medicine. During the early years of the Mount Sinai School of Medicine he was an active advocate of a strong role for history in the medical curriculum. He taught seminars in medical history and arranged a regular lecture series that brought many distinguished medical historians to the Mount Sinai campus. He served for many years as President of the Medical Archivists of New York and was President from 1970 to 1972 of the Friends of the Rare Book Room at The New York Academy of Medicine. His involvement with medical history led him to an engagement with the broader historical profession; he was a founding member of the Oral History Association and served as Chairman of its Nominating Committee. In 1978 he published a lavishly illustrated volume, Medicine: An Illustrated History (New York: Harry N. Abrams Publishing), which brought together the work of many scholars to create a comprehensive history of medicine from ancient times to the present.

Dr. Lyons’s interest in medical history led him to establish the Mount Sinai Archives in 1966 so that the history of the Hospital (and, later, of the Medical School) could be preserved for future generations. In 1986 he obtained the approval of the President of Mount Sinai to hire a professional archivist and establish the Archives on a formal basis within the Levy Library.

Following the success of Medicine: An Illustrated History, Dr. Lyons turned his attention to other historical subjects. His interest in pre-scientific methods of medical prognosis led to a broader interest in the enduring human desire to know the future, inspiring him to carry out an extensive study of pre-modern fortunetelling methods such as tarot cards and astrology. In 1991 he published Predicting The Future: An Illustrated History and Guide to the Techniques, a lavish volume in the same format as his previous book on medicine. In correspondence with his agent at Harry N. Abrams Publishing he proposed an ambitious series of illustrated historical volumes covering all the major milestones of human life, including birth, childhood, marriage and death; although none of these books were completed, he accumulated an extensive collection of reference material on these subjects.

After his retirement from surgery, Dr. Lyons stayed active in medicine by working as a reviewer of workmen’s compensation cases while continuing to pursue his interest in history and the Archives. In 1974 he was awarded the Jacobi Medallion by the Associated Alumni of Mount Sinai, which he had served as President in 1969-1970, for his dedication to the Hospital and the School of Medicine. He died in 2006 after over 60 years of service to Mount Sinai.

This is a recording of the oral history of Helen Rehr, DSW conducted by Albert S. Lyons on December 4th, 1984. It begins with a discussion of her parents and education and then dives into the history of social work and the early years of social service at Mount Sinai. They discuss Doris Seigel (Director of the Social Service Department, 1953-1971) and the changes they together implemented to the department, these include the professionalizion of the staff; her fight to secure positions on the Medical Board for social work and nursing; and her unsuccessful attempt to have them become fully accredited departments.

Dr. Rehr recalls the objections to the Mount Sinai School of Medicine in the early 1950s. Furthermore, Lyons recounts the criticisms voiced by the valedictorian during the first graduation ceremony. She shares her own opinion on the school, as well as observations on the motives, education, and training of medical students and nurses.

Other significant topics include: the Neustadter Home and the Narcotic Rehabilitation Center (known as the Methadone Clinic); the

This material is available for use.

Please contact the Archives (MSArchives@mssm.edu) for information regarding copyright.