Office of the Historian records 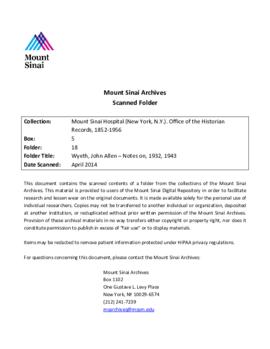 Office of the Historian records

The Office of the Historian was created in 1937 in response to the needs of the Trustees' Committee on Endowments, which was itself formed in 1936. The primary duties of the Office were to compile a source book of historical facts for use in fund raising efforts and to write public relations pieces as needed. Sheldon Coons, a new Trustee at that time, was very involved with these events, and indeed, seems to have been brought on the Board specifically to advise on PR and fund raising matters. This relationship to the Committee allowed the Historian access to the Trustees, and the Historian reported directly to Dr. Turner, the Hospital Director.

As time went on, the duties of the Office changed. In 1942, Roman Slobodin was hired to handle the public relations efforts of the Hospital, heralding the establishment of Mount Sinai's first Publicity Office. (He was succeeded in 1944 by Edith Behrens. See the files of Public Affairs of that time period for more information.)

The Historian continued to work on providing background for the publicity efforts and also shared in the work of creating fund raising mailings. Also, the Historian handled the creation of several internal publications, such as the Private Pavilion booklet, the School of Nursing bulletin, the Trustee's Bulletin, and the Annual Report for 1941. (Later Reports were done by the Publicity Office.)

The concept of a source book of historical data grew into the hope for a full history of the Hospital from its founding to the present. Dr. Turner was especially encouraging of this idea. This work resulted in 1942 in the serial publication of the history to 1904 in the Mount Sinai Journal. In 1944, a compilation of this material, "The Story of the First Fifty Years", was published and distributed. The historical data gathering and publications were also used to help celebrate the 90th anniversary of the Hospital in 1942. The set piece for this celebration was a historical exhibit that was open to the public. The history was based on extensive reading and note taking in the primary sources of the Hospital: the minutes of the Trustees, Medical Board, Auxiliary, and the Directors of the School of Nursing, as well as annual reports and interviews with individuals connected with the Hospital in earlier years. Memorabilia and reminiscences were gathered for the Hospital's archives, and copies were made of relevant documents in other collections, especially those of the American Jewish Historical Society. Work on the History was halted in early 1944 due to the War.

In 1951, with the Centennial of the Hospital approaching, Joseph Hirsh was hired to write the history of Mount Sinai and to put the Hospital's archives in order. His work, "The First Hundred Years of the Mount Sinai Hospital", published in 1952, drew extensively on the notes and interviews conducted by the earlier historians. Hirsh stayed at least until 1953, when the historical files of the Hospital were again left to wait for another surge of historical interest.

These files consist mainly of the records created by the Historians of the 1940's. There is little here representing Hirsh's work, except for a few drafts and minor correspondence. The documentation is composed mainly of notes and cross-reference sheets about individuals and topics. There had been voluminous files relating to the publication of the various booklets the Office worked on, but the bulk of these were discarded as having little worth.

The most valuable aspect of this collection is the written memoirs and interviews that the Historians conducted with individuals important in Mount Sinai's past, now long dead. This
list includes: Capt. N.T. Phillips (Isaac Phillips' son), Emanuel Libman, Gregory Shwartzman, Charles May, Carl Koller, and Arthur Master. Worthy of special mention here is the written explanation by Carl Koller regarding the evolution of his work and that of Sigmund Freud on cocaine as an anesthetic for the eye. Alumni and chiefs of departments were prevailed upon to write histories of their services up to 1940. These are also extremely precious. These are filed by department, regardless of author.

Another important facet of this collection is the glimpse it provides of the amount of involvement the Trustees maintained in the day-to-day operations of the Hospital. They were consulted about the expenditure of $20 for a publication, as well as about the color of a binder in which reports would be placed. Trustees Leo Gottlieb, Waldemar Kops and Sheldon Coons were especially active during this time.

Of final note, the files relating to the 90th Anniversary of the Hospital are here. These include correspondence about the exhibit, special lectures and the publication in the Mount Sinai Journal of the history of the Hospital. There is also a letter from Franklin D. Roosevelt congratulating Mount Sinai on its ninety years of service.

One folder has been scanned and is available in the Digital Repository.

These files were gathered from 1937-1955. When the Office of the Archives was set up in 1965, they formed the basis for the current archival collection. The files had been dispersed into other filing systems over the years. The alphabetical arrangement found here was created by the Archivist when the papers were processed in 1987. As additional files have turned up, they have been added with folder numbers and letters, e.g. 13a.