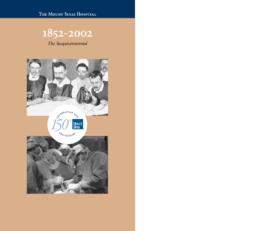 A Trustee-led committee was created in 2001 to plan and create events to mark the sesquicentennial of The Mount Sinai Hospital’s founding in January 1852. The Chairman of the Committee was Trustee Ellen Katz.

This material consists of planning files and commemorative material from the various events held during 2002/2003 to celebrate the 150th anniversary of The Mount Sinai Hospital.

This collection was created by the Archives staff to bring together the records regarding the celebration by The Mount Sinai Hospital of its 150th anniversary in 2002. The Archivist, Barbara Niss, was involved with the planning of the celebration. Robin Solomon from the President’s Office donated the proclamations in 2013. A framed proclamation signed by all Mount Sinai Trustees in 2002 was donated in 2016 when the former Board Room on Annenberg 5 was re-purposed.