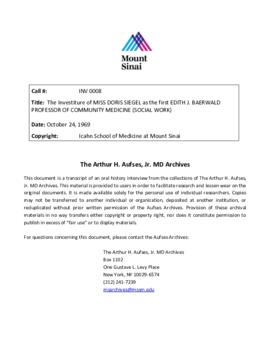 This is a recording of the investiture of Ms. Doris Siegel as the first Edith J. Baerwald Professor of Community Medicine (Social Work) on October 24, 1969. Edith J. Baerwald became a member of the Social Services Auxiliary (Women’s Auxiliary Board) in 1916, and served on it for more than thirty years.

Dr. Herman D. Stein, the Provost of Case Western Reserve University, delivered the main address. In his address, he discussed professional education curriculum and changes occurring as professions reevaluate their ethical and moral responsibilities. He charted changes that social work had implemented in medical education and practice.

This material has been digitized. Transcript is available.