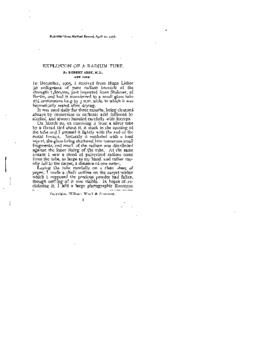 "A native New Yorker, Robert Abbe (April 13, 1851-March 7, 1928) was born at 7 Dutch Street in lower Manhattan, and was the fifth and youngest son of seven children born to George Abbe, a New York merchant, and Charlotte Colgate, the daughter of the founder of the Colgate Soap Company. Their family home was at 32 East 20th Street, down the block from Theodore Roosevelt’s family, and a few blocks north of the Colgate family home where their maternal grandparents frequently welcomed them.
Abbe attended public schools and took evening classes at the Cooper Union for the Advancement of Science and Art to develop his talents for drawing and painting. He earned an undergraduate degree from the College of the City of New York in 1870 and joined the faculty there after graduation, teaching drawing, geometry, and English. He then enrolled in the College of Physicians and Surgeons (NYC), completing an MD degree in 1874.
He was on the House Staff at St. Luke’s Hospital from 1874 to 1876. He then became an Attending Surgeon at the outpatient department of New York Hospital from 1877 to 1884. In 1884 he was appointed Attending Surgeon at St. Luke’s, actively serving until 1924 when his poor health forced him to retire. He was also an Attending Surgeon at Roosevelt Hospital (now Mount Sinai West) from 1897 until retirement, as well as the Cancer Hospital, New York Babies Hospital, Ruptured and Crippled (today’s Hospital for Special Surgery), and Woman’s Hospitals. Abbe served as the professor of didactic surgery at the Women’s Medical College of New York from 1878 to 1880, and was a professor of surgery at The New York Post-Graduate Medical College between 1888 and 1897. He was also a lecturer in surgery at the College of Physicians and Surgeons starting in 1898. In later years he gave up all other appointments to devote his entire time and energies to St. Luke’s Hospital.
In 1891, at the age of forty, Abbe married Catherine Amory Palmer, the widow of close friend, Courtland Palmer. They were together for twenty-one years before Catherine passed away in 1920. After his marriage, Abbe began to visit Bar Harbor, Maine. He became interested in the Native American relics he found around the Bar Harbor area and began collecting them. He decided to create a museum to house his growing collection, and dedicatedly worked towards this end, building support from various interested parties. The Abbe Museum of Stone Age Relics was dedicated five months after his passing. It continues to serve the public and honor Robert Abbe’s memory today.
Abbe’s inquisitive nature led to his reputation as a pioneer in plastic surgery. A request to graft hands onto a man who had lost them in an explosion led to his successful experimentation with re-attachment of amputated limbs and cut veins on cats, dogs, and sheep. Some of his notable procedures include developing and disseminating a procedure for repairing hair cleft lip deformities, (known as the Abbe Flap), the construction of a congenitally absent vagina, and a procedure to relieve immobility of the temporomandibular joint. He published many papers describing these new procedures, as well as the more common ones he conducted.
After Pierre and Marie Curie’s discovery of radium in 1898, Abbe began corresponding with them about their work. In 1903 a curious Abbe went to visit their laboratory in Paris, and returned home with a supply of the element, with which he experimented, first on himself, then on small animals, and eventually on patients. He is often credited as being a founder of radiotherapy in America.
His interests, however, were not limited to medicine. Abbe continued to enjoy drawing, painting oil portraits and watercolors into adulthood, and he began experimenting with the developing art of photography as well. When the Lumière brothers developed a new method of color photography (circa 1903), Abbe became an early experimenter with their autochrome plate methods when the technique became available to the general public in 1907, photo-graphing his family in the gardens of their Bar Harbor home, producing delicate and lovely images. When the first post-World War I air transports from London to Paris began service, he was one of the first to take a flight across the Channel in 1920.
He was a member of numerous medical societies, including the Medical Society of the State of New York, The American Surgical Association, the International Surgical Association, the New York Surgical Society, the Practitioners’ Society, and the American Radium Society. He served as Vice President of the Academy of Medicine, and was a member of the Century Association and the University Club. In 1911 Abbe was made an associate fellow at the American College of Physicians (Philadelphia).
A few years before he died, it became apparent that Abbe was suffering from an aplastic anemia, probably due to his handling of radium. He survived for several years due to monthly blood transfusions, but finally succumbed to his condition and died on March 7, 1928 at the age of 77."

This small collection, (inclusive dates: 1888-1928), is comprised primarily of eight folders of reprints of Abbe's published articles on a variety of medical case studies, and a number of reprint articles about Abbe by others (1 folder). The remaining twelve folders include: an address by Abbe to soldiers leaving for World War I from Maine; a 70th birthday dinner menu, and a bound volume of transcriptions of congratulatory letters on the same occasion; out-going letters to nephew Hubert Howson and niece Helen Louise Howson, Robert Abbe MacKenzie, a distant relative and namesake, and Carrie Bath, the St. Luke's Director of Nursing, recommending two Bar Harbor, Maine women for the program; an article on his donation of artifacts of prominent medical figures to the College of Physicians of Philadelphia; several small drawings and doggerel ("comic verse composed in irregular rhythm") by Abbe; recollections of him by Robert Abbe MacKenzie; a memorial book of quotes from Abbe's writings; and a few photographs including formal portraits of Abbe, and prints of images he made of his family in Maine, taken from Lumiere autochrome plates, as well as the original autochrome plates. Note that the photographs have been removed from the collection and added to the Mount Sinai Archives Photograph Collection, and need to be requested separately for viewing.

This material is available for use; however, the autochromes are fragile and only a digital copy may be used by researchers. Contact the Archives (MSArchives@mssm.edu) for more information.

The autochrome plates are closed to general viewing and handling due to fragility; access on a case by case basis, at the discretion of the archivist. Digital images, and physical prints are available.

The Robert Abbe Papers and Reprints were transferred to the Mount Sinai Archives from the St. Luke's-Roosevelt Hospital Library in June of 2016, after the 2013 integration of the two hospital systems.